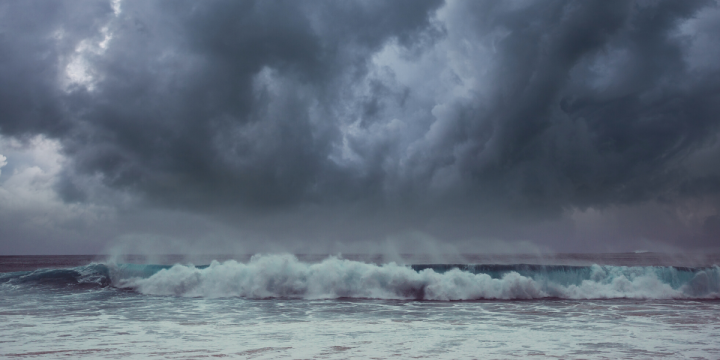 It is impossible to ignore the metaphorical punch of these twin sections at the end of Acts titled “The Storm” and “The Shipwreck.” Let’s unpack each and see what God has in store for the storm you have just passed through, are in now or are about to encounter.

The storm should not have come as a surprise. Paul and his pals had barely made it to Crete and had docked at “Good Harbor.” But “it would be stormy weather from now on through the winter, too dangerous for sailing. Paul warned, ‘I see only disaster ahead for cargo and ship—to say nothing of our lives!—if we put out to sea now.'” (Acts 27: 9:10, MSG)

It’s possible the crew might have heeded their own knowledge of climate and the seasons, or even Paul’s warning, except that “a gentle southerly breeze came up, they weighed anchor, thinking it would be smooth sailing.” (Acts 27: 13)

How often has this happened in your own life? We know from past experience, intellect and wise counsel that the option before us could be disastrous. But it takes only a gentle breeze to turn us from what we know is the right, if less desirable course, onto another that promises smooth sailing.

It wasn’t long and unsurprising that the crew quickly encountered trouble, sailing right into a nor’easter so fierce that they had to pass up safe harbor at an island and pull their lifeboats into the ship, eliminating hope for safe escape.

They, like we, unwisely entered into a situation outside of their control. They were literally powerless against the force of the storm and could only hope to withstand the battering.

Isn’t this exactly how it feels when you are in one of the storms of life? Alone. In the dark. Stuck. Powerless now to change your circumstance. Regret, remorse and self-loathing pounding from every side. Should have. Would have. Could have. It takes every ounce of energy to hold it all together. There is no light — not even the stars or a glimpse of the sun. Just darkness all around, bringing fear and foreboding of other, as-yet unseen dangers.

Next day, out on the high seas again and badly damaged now by the storm, we dumped the cargo overboard. The third day the sailors lightened the ship further by throwing off all the tackle and provisions. It had been many days since we had seen either sun or stars. Wind and waves were battering us unmercifully, and we lost all hope of rescue.

This is rock bottom. That moment when you’ve exhausted your own resources. You have nothing else within you to fight with. You see no hint of light or reprieve. And yet the battle rages on unaffected by your state. It’s that moment in the storm when it is only human and rational to lose all hope.

What has been lost cannot be recovered. The Bible here says, “With our appetite for both food and life long gone.”

Losing your weapons and resources to fight the good fight happens first. But the more dangerous depletion is the loss of will to fight. To live.

Yet we have a God who will not forsake us. He will never leave us. He loves us so much that he waits patiently as we follow our own gods down the roads to perdition, as we fight in battles we sought out and created, as we give our last and are depleted. And in that moment, when all hope is lost, it’s then that we find our stone hearts cracked open, desperate for help, praying that we have not gone too far to be reachable by the only one who can save us. And it’s in just such a moment that Paul stands up and says to the crew:

“Last night God’s angel stood at my side, an angel of this God I serve, saying to me, ‘Don’t give up, Paul. You’re going to stand before Caesar yet—and everyone sailing with you is also going to make it.’ So, dear friends, take heart. I believe God will do exactly what he told me. But we’re going to shipwreck on some island or other.”

The only thing God instructed was to stay on the ship. He promised Paul that everyone who remained on the ship would survive. Of course a few jumped ship in a lifeboat still not trusting in the Lord and they perished.

Today, will you put your trust in God, be still in the ship even as the storm rages, and know that he alone can and will deliver you safely to shore.

He calmed the storm and its waves quieted down. So they rejoiced that the waves became quiet, and he led them to their desired haven. Let them give thanks to the Lord for his gracious love and for his awesome deeds on behalf of mankind.

“You of little faith, why are you so afraid?” Then [Jesus] got up and rebuked the winds and the waves, and it was completely calm.

God is our refuge and strength, an ever-present help in trouble.