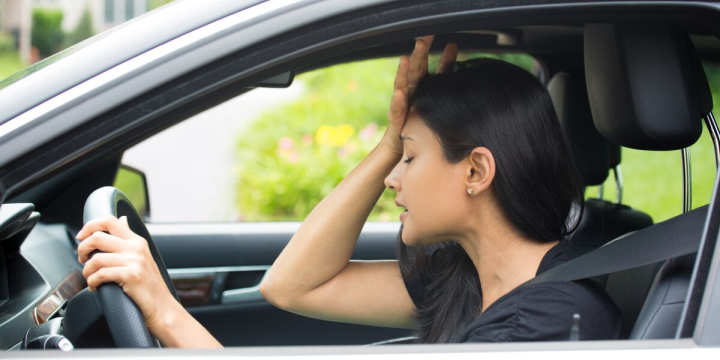 If today you hear his voice, harden not your hearts.

My day was off to a great start; I actually was going to be early to work. As I pulled up to the first, and longest, light on my commute I noticed a large truck lumbering two cars ahead.

“Stay straight. That truck is going to be a problem.”

I considered the detour, but decided against it. As soon as we turned left I regretted my decision, as the truck chugged along at 25 mph on the 45 mph, two-lane road. As it approached the hill it sputtered. Then stopped. Seriously?

It struggled to negotiate the hill, rolling backward, precariously close to the only car between us. I watched in disbelief as this mess unfolded before me over the next 10-15 minutes, while behind me the early morning rush piled up. Finally, frustration and a gap in oncoming traffic propelled me around it.

“As you learn to recognize my voice in these simple moments, you grow more inclined to hear and obey me in the really important ones.”

A week later I was winding my way through Terminix’s interminable phone system. When I finally reached an agent the first thing she did was ask for the same information I had just struggled to register with the automated operator.

“Do I really have to do this all over again,” I said, not attempting to hide my frustration.

“It’s not her fault. You have no idea what she’s carrying today.”

Again I shook off the voice inside, this time choosing instead to heed to my simmering anger. Then it happened. The agent asked if the bugs I wanted to treat were inside or out; I snapped. “Do you really think I would be calling you to exterminate the outside?”

No. I didn’t. In fact, by the time I hung up I felt far worse. I was angry at myself for my lack of self-control and more so for my blatant disregard of the Lord’s call on me.

Now I could picture the woman on the other side of the phone through his eyes. What had she gone through this morning to get to work? Was she being paid enough to listen to me rant over things she could do nothing about?

I had missed one of a thousand opportunities the Spirit serves up daily to let his light shine in a dark and weary world–the chance to extend Christ’s love and grace to one of his beloved children. I didn’t feel better at all.

If I am going to follow Jesus, then I have to actually follow him–his example, his Word and his voice. I must submit to his Spirit whether that means being patient with the voice on the other end of they phone or how to live my days to his glory.

Will you join me in praying this day that God will speak to us and prepare our hearts to listen and obey:

May the words of my mouth and the meditation of my heart be pleasing to you, O LORD, my rock and my redeemer.

“Speak, for your servant is listening.”