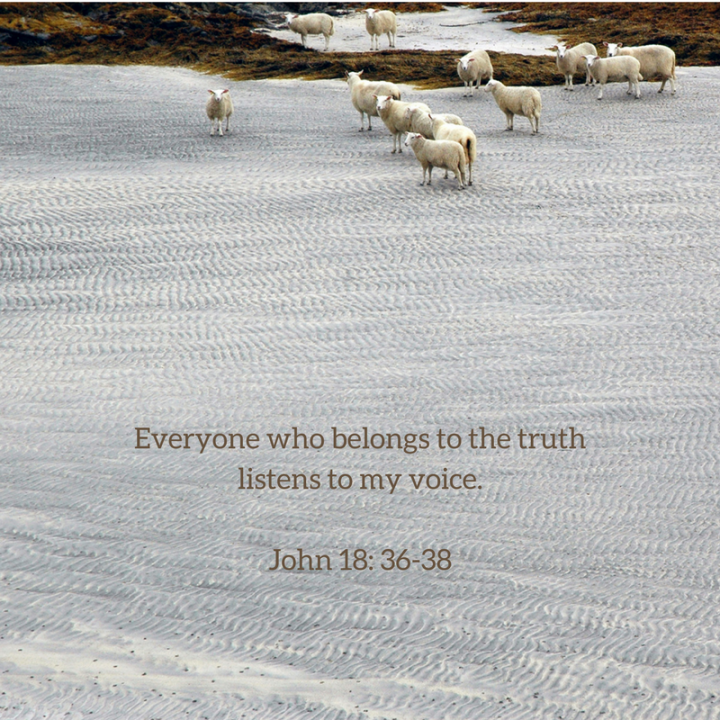 As a recovering people-pleaser I can relate to Pontius Pilate. This Holy Week, as we revisit the story of Jesus’ Passion, I’m discovering his story anew. And as I look at him, I see myself and my own weaknesses reflected back.

Yet, ultimately, Pilate fails to act on the truth he has been given…and that decision comes at a cost.

The Cost of Others’ Approval

Most of my failures in life have resulted from my desire to gain others’ approval, so I totally get why Pilate squirms under the crowd’s pressure to make a decision about Jesus.

At first he tries to duck the issue altogether. When the opposition forces his hand Pilate has a personal encounter with Jesus, who delivers a heavy dose of truth:

Pilate asked him, “So you are a king?”

Jesus answered, “You say that I am a king. For this I was born, and for this I came into the world, to testify to the truth. Everyone who belongs to the truth listens to my voice.” (John 18: 36-38)

What an invitation Jesus has just offered Pilate: to hear and follow the voice of the Good Shepherd.

You can sense Pilate’s yearning as he leaves Jesus and darts out to appeal to the Jews again, this time suggesting that he free Jesus as part of the Passover custom–a creative, but futile attempt. Next, he has Jesus flogged thinking this will satisfy them. But they sense his weakness and his need to appease them, so they refuse to compromise.

I know from personal experience, and perhaps you do too, that pleasing others is an elusive goal. Pilate is so desperate for this approval that he forsakes his own conscience, his judgment, his wife’s warning and the truth he has been given by God Himself.

When God reveals truth in our lives, He calls us to act on it.

Truth: How often have I been so desperate to be liked, to be recognized for my effort, to have my good intentions acknowledged that I’ve made an idol of others’ approval?

Am I now seeking human approval or God’s approval? Or am I trying to please people? If I were still pleasing people, I would not be a servant of Christ.

The Cost of Self-Protection

Pilate might have risked the wrath of the crowd if he could have done so without such a high personal cost. Jesus’ claim to be the King of the Jews was one thing, that was manageable, it wasn’t really Pilate’s issue, after all.

But then the crowd told Pilate that the man standing before him had claimed to be the Son of God, the title given to Tiberius, son of Caesar and Pilate’s direct superior.

And worse yet they now threatened Pilate directly by saying, “If you release this man, you are no friend of the emperor. Everyone who claims to be a king sets himself against the emperor.” (John 19:12)

If word got back to Tiberius that Pilate had released a man who posed a direct threat to his authority there was no telling what the cost might be: his social standing, his governorship, quite possibly, his life. Pilate convinced himself he had no choice.

Truth: I am tempted to approach the hard places God calls me to half-heartedly(The Rock and the Hard Places) , tip-toeing into such assignments in hopes that I can “do the right thing” without risking my reputation in the world…even in small things (“If I offer to pray with a stranger will she dismiss me as a ‘Jesus freak’?”) Is it possible to serve God without personal cost?

For where your treasure is, there your heart will be also.

I consider that the sufferings of this present time are not worth comparing with the glory about to be revealed to us.

The Cost of Compromising Truth

When Jesus told Pilate, “Everyone who belongs to the truth listens to my voice,” Pilate’s next words betray the condition of his heart, “What is truth?” (John 18:38)

After that Jesus does not speak to Pilate again except to make a final assertion regarding the folly of his choice:

You would have no power over me unless it had been given you from above.

Truth: Like Pilate I find myself tempted to take the easy way out. But my prayer as I approach the cross of Jesus this Holy Week is to invite more of Him to overtake me so that I can be faithful to the Truth, fearless in my obedience and relentless in love to the end.

When Jesus knew that all was now finished, He said (in order to fulfill the scripture), ‘I am thirsty’….When Jesus had received the wine, He said,