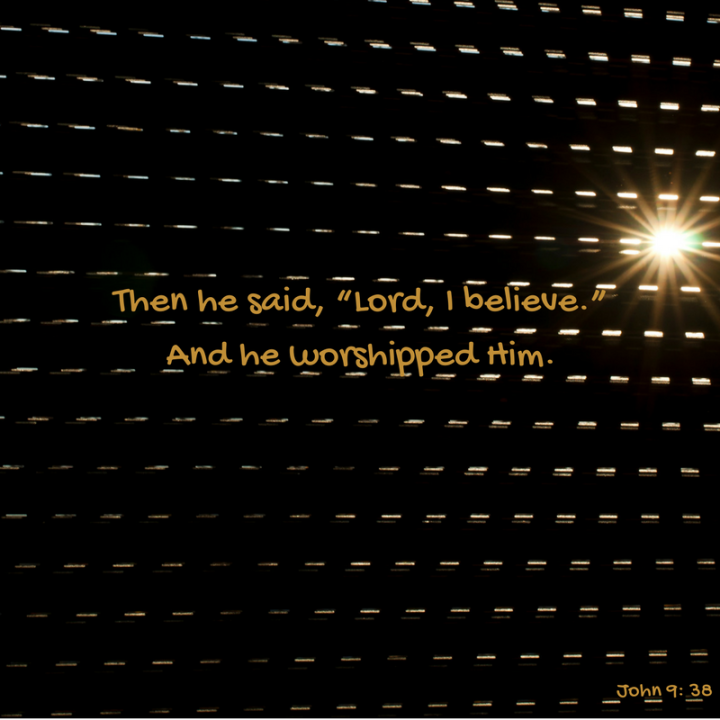 I’ve been camped out recently in the well-known story of Jesus healing a man who was born blind. One of the problems with such ubiquity is it can make the amazing look commonplace:

“Oh you know, that story when Jesus gave sight to the blind man”

The significance of the miracle was not lost on John; he goes to great lengths to record several eyewitness accounts in order to verify that the man was indeed born blind:

The most powerful witness comes from the man himself:

Since the world began it has never been heard that anyone opened the eyes of someone born blind.

Even some 2000 years later, giving sight to those born blind is still quite a miracle, meriting such headlines as, “Canadian man born blind sees for the first time at age 68.”

And we now know there is more involved than restoring physical function to the eyes. What we see must be connected to our other sensory experiences in order for a person to develop a reliable perception of the world around him.

This was a problem articulated by William Molyneux back in the 1600s, whose wife was blind. Molyneux’s problem, as it is became known, asks if a person born blind who gains sight would be able to distinguish a similar sized sphere from a cube by sight alone. The short answer is no.

The most widely documented case is that of Michael May, an interesting character in his own right because he competed as a downhill skier and worked for the CIA, among other notable accomplishments, all before gaining his sight in 2000. Yet even when his eyes — which were damaged in a chemical explosion at age three — were repaired, he faced ongoing challenges with visual processing:

May still has no intuitive grasp of depth perception. As people walk away from him he perceives them as literally shrinking in size. He has problems distinguishing male from female faces and recognizing emotional expressions on unfamiliar faces.

His brain lacked the full picture of the world to be able to describe its beauty. This made it difficult for him to lead a normal daily life. Michael’s early blindness benefited him so far; he developed very precise senses of hearing and touch. (Wikipedia)

In Mark 8:24, we read of a blind man  in Bethsaida whom Jesus healed; his initial report echoes this gap, “I see men as trees, walking.”

Yet here the man appears to have been given full physical and perceptual acuity immediately.

As the Pharisees reject first the timing of this man’s healing (on the Sabbath), then the spiritual qualification of the healer (We know that this Man is a sinner), and ultimately the spiritual fitness of the recipient (You were completely born in sin), the man adroitly and accurately shifts the focus from his vision problem to their hearing problem:

As the Pharisees continued to press him he answered them, “I told you already, and you did not listen. Why do you want to hear it again? Do you also want to become His disciples?”

Then they insulted him and said, “You are His disciple, but we are Moses’ disciples. We know that God has spoken to Moses. As for this fellow, we do not know where He is from.”

The man answered, “Well, here is an amazing thing! You do not know where He is from, and yet He opened my eyes. We know that God does not listen to sinners. But if anyone is a worshipper of God and does His will He hears him.

Since the world began it has never been heard that anyone opened the eyes of someone born blind. If this Man were not from God he could do nothing.”

They answered him, “You were completely born in sin. Are you teaching us?” And they threw him out.

This exchange is fascinating and worth parsing:

The Pharisees claim they’re in the right because they listen only to the one true God whom they know through what He spoke to Moses.

But the man sees right through them, countering that if Jesus were not from God He would not be able to give him sight because God wouldn’t have listened to Him. Moses heard God, but God hears Jesus, the man points out; this implies a deeper, far more intimate relationship.

To put a finer point on it he adds that this type of healing has never even been heard of before. This is a unique and powerful act, achievable only by one who has God’s ear.

At the beginning of the story we see a man considered to be blind because of his sin challenged by Pharisees who are considered to have great vision because of their holiness. By the end of the encounter Jesus has turned everything upside down, as the one thought to be blind is revealed to have great vision, while those thought to be sighted are in fact willfully, persistently, spiritually blind:

Jesus heard that they had thrown him out, and when He found him He said, “Do you believe in the Son of God?”

He answered, “Who is He, Lord, that I may believe in Him?”

Jesus said to him, “You have seen Him, and it is He who speaks with you.”

Then he said, “Lord, I believe.” And he worshipped Him.

Some Pharisees who were with Him heard these words and said to Him, “Are we also blind?”

If you were blind you would have no sin. But now you say, ‘We see.’ Therefore your sin remains.

More than 40 Greek words mean to see; four are used in this story. And, John deploys them progressively to move the story itself from darkness toward light:

In verse 1 Jesus passes by and sees a man blind from birth. The word here is eídō, which means mechanical, passive or casual vision. Basically Jesus was aware of the man’s presence.

Throughout the heart of the story the word blepō refers to the man’s sight; this connotes the seeing and perceiving we do every day.

In verse 8 the neighbors “had previously seen that he was blind.” Here the word used is theōreō, which means “been a spectator to;” it signifies earnest, continued inspection.

As the story concludes Jesus reveals his glory to the man whose spiritual vision is now clear:

Here the word is horáō, which means to gaze with wide-open eyes as at something remarkable.

What a beautiful literary parallel John offers to our own faith walks.

As we see and respond to the truths God reveals in our own lives, we are given more truth. When we reject truth we move toward spiritual darkness; standing still is not an option. (See the parable of the talents, Psalm 43:3, Ephesians 4:17-22, among others)

How do we apply this story to our own lives as we seek to enhance our spiritual vision?