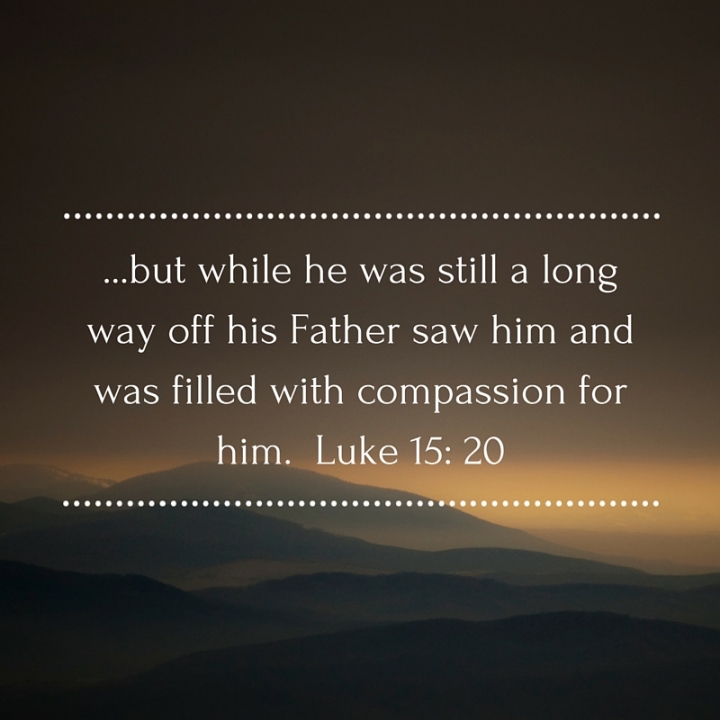 But while he was still a long way off, his father saw him and was filled with compassion for him.

The father of the prodigal son has just spotted his boy. Can’t you just see the silhouette on the horizon, indistinguishable to any but the one who gave him life? It’s not dumb luck that he happened to look out at just the right moment. You know this man had gazed at that horizon longingly, and without reward, for days on-end.

When your child is distant from you — physically, emotionally, mentally or all three — the pain of the separation is palpable. This is true under the best of circumstances (See On Roots and Wings), and even more true in the worst of times. As you abide the stranger in your midst, you seek any sign of the babe you once held in your arms, the toddler who clung to your legs, the child who leaned on you — and struggle to remain faithful that he will resurface eventually.

Imagine if, as the boy looked toward home, the shadow he saw in the distance was of his father standing with arms crossed and foot tapping? Would he have persevered?

Fortunately his father didn’t need a close-up look to know his son had been through the ringer. Jesus tells us the sight of the boy filled his father with compassion. In Greek the word is splagchnizomai; it literally means “to be moved as to one’s bowels, hence to be moved with compassion, have compassion (for the bowels were thought to be the seat of love and pity).” I think of it as shaken to his core.

This father recognizes what a journey his son has endured to reach home. Without needing  to know the sordid details he instinctively knows that his son is hurting. There will be time later for wisdom, lessons learned and even for consequences. In this moment this Daddy didn’t need to think about the right thing to do; his heart led the charge with complete abandon! He threw off his shoes, hiked his robes and:

…ran, and fell on his neck,

What a beautiful image. This is “throw-yourself-in-front-of-a-bus” love. Don’t you know that father knocked his son to the ground and smothered him with kisses? Wouldn’t you?!

Now imagine the son’s reaction. He had dragged his feet for miles, remembering the things his father had taught him, lessons he had cast aside with the same reckless abandon that he was now being loved.

Betrayed and wounded so many times since rejecting this man, he must have been afraid to trust the resplendent, lavish love pouring over him in this moment, for he stuck to his script, acknowledging his wrongdoing and asking only for the bare minimum needed to sustain himself.

But his father’s love is so much more than sustaining; it’s abundant. He can’t wait to fulfill the dream he has held close since the moment he lost his son. “Quickly” he instructs his servants, and requests a robe, ring and shoes for his son. The robe in which he cloaks his son denotes primacy; the father immediately restores his place as first son. He adorns his hand, the source of authority, with a ring, and binds his feet, the same feet that took him so far from home, in shoes to protect him from harm.

When challenged about his response by his other son the father is unequivocal about both his emotion and the wisdom of his decision:

We had to celebrate and be glad, because this brother of yours

was dead and is alive again;

he was lost and is found.

Living with the End in Mind

Jesus’s parable has a quick and happy ending; he conveys the entire story in just 21 sentences and leaves us to fill in the gaps.

If you have walked — or are walking — the path with a prodigal child it’s the gaps that get you:

Perhaps you are standing staring at the horizon, waiting on your child’s return. What can you do in the meantime? I think there are three roles as a parent that are meaningful and valuable in such a season:

First and most importantly, intercede for your child in prayer. There are two instances in the New Testament where parents implore Jesus on their children’s behalf. In both cases their children are possessed (and if you’re parenting a prodigal this thought has probably crossed your mind, more than once if you’re honest!) In Matthew 15:22 a mother comes to Jesus about her daughter. “Then Jesus said to her:

Woman, you have great faith! Your request is granted.” And her daughter was healed at that moment.

In Mark 9 a father says to Jesus of his son, “If you can do anything, take pity on us and help us.” ‘If you can’?” Jesus replies. “Everything is possible for one who believes.”

Immediately the boy’s father exclaims, “I do believe; help me overcome my unbelief!” Jesus said to his apostles of this possession:

This kind can come out only by prayer.

I firmly believe God uses such times as these to refine our faith. Cry out to God in the same honest, plaintive voice as this parent, ““I do believe; help me overcome my unbelief!”  Let God use your faithfulness on your child’s behalf to enrich your own walk with the Lord.

Remind Your Child How God Sees Her

Even as they grow up children care deeply about how they look in their parents’ eyes. Shame over their mistakes and fear of being labeled a “problem child” deceive many a prodigal to not look toward home.  Remind your child who she is in God’s eyes and your own. One practical way to do this is to give your child scripture passages that speak of God’s love for his children, personalized with your child’s name:

For God so loved [name] that he gave his only Son, that whoever believes in him should not perish but have eternal life.
John 3:16

And finally love unconditionally. The most important gift you can give your child is the unconditional love that you have been given first by God. Knock him over with your love and kiss him all over. Make sure he knows that nothing he has done or ever will do could change how much you love him.

There will be time for truth and most of it will arrive on its own accord. Your role now is to make sure it is covered in grace, the same grace you received:

But God demonstrates his own love for us in this: While we were still sinners, Christ died for us.
Romans 5:8

Sadly not every prodigal returns home. Not every parent is blessed to be able to lavish his child in hugs and kisses again. As you walk in faith, hope and love and wait on a child that remains far from home, hold this promise close to your heart:

And we know that in all things God works for the good of those who love him, who have been called

according to his purpose.

Read this series from the beginning.

One thought on “Part 3: The Prodigal Returns”