This is Lesson #2 from the Silence and Solitude retreat in which I took part last weekend. If you missed Lesson #1 you can begin with A Spa Day for the Soul.

I continued sitting in the wooded backyard with my eyes closed. I could hear two sounds clearly and consistently: the rustling of leaves by squirrels scampering about and the songs of the birds.

God drew my attention to the nature of each of these creatures as the topic of fear percolated to the top of my senses.

Listen to the squirrels, He breathed over my soul; they scurry about endlessly trying to gather enough, yet losing much of what they store in their frenzy. (Luke 12:20) They live believing they are in control, and yet their little lives are defined mostly by this inefficient, futile focus on self-sufficiency.

Compare them now to the birds. Every bird begins its day in praise, singing a unique song that joins with the others to create a glorious cacophony celebrating the gift of today. Their songs continue for as long as the sun shines, yet most of creation fails to hear them once their own nut-gathering has begun.

For birds the song is primary.

You know the scripture from Matthew:

Look at the birds of the air: they neither sow nor reap nor gather into barns, and yet your heavenly Father feeds them. Are you not of more value than they? And which of you by being anxious can add a single hour to his span of life?

But those who wait upon God get fresh strength. They spread their wings and soar like eagles.

The retreat had begun with 25 of us gathered together, listening and centering on various meditations, including Mark’s account of Jesus and the apostles in the storm at sea. This is the story where Jesus sleeps on a pillow as the apostles struggle to prevent the boat from capsizing. We were shown Rembrandt’s depiction of the scene: 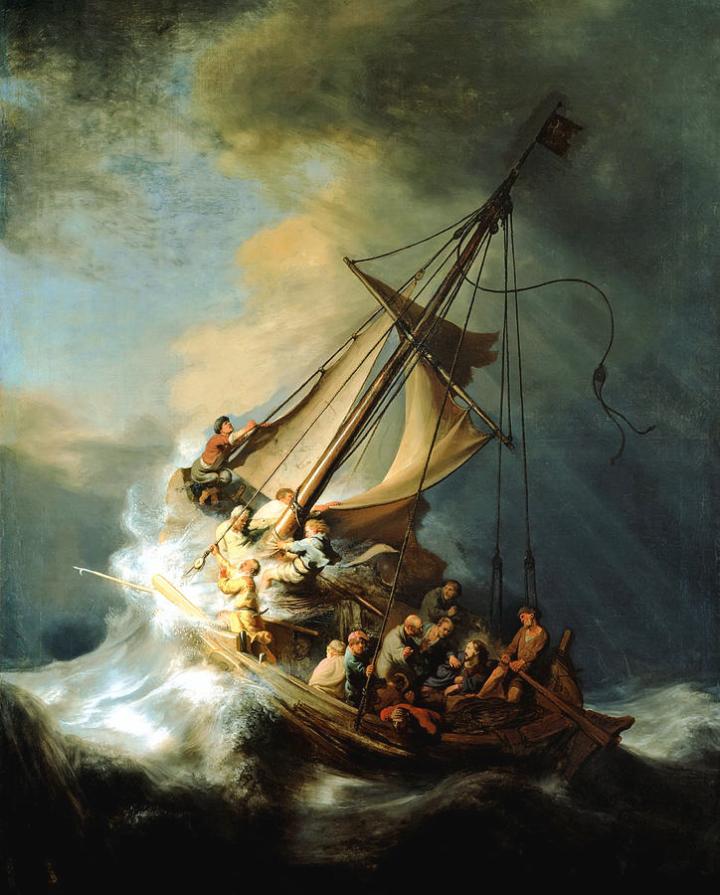 On that day, when evening had come, he [Jesus] said to them, “Let us go across to the other side.”

And leaving the crowd they took Him with them in the boat, just as He was. And other boats were with Him. And a great windstorm arose, and the waves were breaking into the boat, so that the boat was already filling.

But He was in the stern, asleep on the cushion. And they woke Him and said to Him, “Teacher, do you not care that we are perishing?”

And He awoke and rebuked the wind and said to the sea, “Peace! Be still!”

And the wind ceased, and there was a great calm.

He said to them, “Why are you so afraid? Have you still no faith?”

And they were filled with great fear and said to one another, “Who then is this, that even the wind and the sea obey him?” (Mark 4: 35-41)

Riding Out the Storms

The topic of storms has been popping up a lot recently in my quiet time. Unlike the storms that take shape on the forces of a fallen world, these are storms of a different sort, the ones the Lord creates as He moves us to a new place and equips us to do a new thing.

It’s an integral part of such passages, beginning with the Red Sea (Read The Red Sea and the Linemen for more on this.) Jesus sent the apostles into two storms, in this story, and then again in Mark 6:45-51 where Peter applies what he has learned and steps out onto the waves with Jesus.

Here is what God has been teaching me about these storms.

God uses place and equips us on the journey.

In this case Jesus was sending his apostles to a new place, on the other side of where they had been serving. If it is true He sent them, then it is true He led them into this storm as well.

If you look for context at the gospel of Mark, Jesus had been teaching His newly called followers in parables. But as soon they get to the other side of the storm it’s “go-time,” time to put those teachings into practice:

And when Jesus had stepped out of the boat, immediately there met him out of the tombs a man with an unclean spirit.

This is among the most fantastic healings in the New Testament, unclean spirits squealing in protest and proclaiming Jesus’ deity, while begging for divine mercy until He discharges them into a herd of pigs, which immediately drowns in the sea (interesting outcome given what we’re learning, isn’t it?)

Imagine how this supernatural scene might have derailed the apostles had Jesus not first offered them some powerful context clues of His sovereignty over their natural world?

Jesus is at the helm.

The passage says that the apostles took Jesus in the boat “just as he was.” In English that sounds like they had caught Him in His jammies and fuzzy slippers and said, “No time to change, you’re fine as you are.”

But that’s not what’s going on here. The Greek word means “to be,” similar to God’s proclamation of His nature to Moses in Exodus 3:14: I AM that I AM. Jesus was fully present. While the apostles became distracted with striving and doing, His presence was sufficient to meet all their needs in the calm as well as later in the storm.

As storm waters flooded over the bow the apostles, facing forward, feared for their lives. Yet in their frenzy they forgot who had their back. Jesus was in the stern, the place from which a boat is steered…He was in control, not just of the boat, but of the storm itself.

An encounter with the Lord produces fear.

Once Jesus rebukes the wind and waves, scripture tells us, “It was completely calm.”

Imagine that juxtaposition: one second it seems as though the forces that oppose you are about to overcome you; a moment later Jesus brings complete calm, a peace that surpasses all understanding (Philippians 4:6-7). Such a rapid shift can often feel surreal, difficult to trust or lean into with assurance.

Perhaps that is what moved the apostles from fear to downright terror. Mark reports they were terrified after Jesus quelled the waves, not in the storm.

The fear of the Lord is the beginning of knowledge: but fools despise wisdom and instruction.

To know God is to fear Him. This is not a small god who can be contained, manipulated or cajoled into doing our will (In the Name of God). To move out into the deep waters of knowing and relying on Him is to move toward awe. The Greek word for awe is yare’, which means “to fear, to revere”; they are close cousins.

Fear can occur as we become aware of our own sinfulness, as Adam experienced in the garden, “I was afraid (yare’) because I was naked and so I hid.”

Or it can be a source of joy from knowing the majesty and power of God, as the psalmist writes:

You who fear (yare’) the LORD, praise him!

As you step out in faith and obedience to where the Lord is sending you, keep these lessons in mind: