He’d been waiting for this day. He hopped out of bed and quickly washed and dressed. He chose one beautiful, ripe piece of fruit from the assortment on the table and headed out the door.

He had heard about this teacher for months, and today, word was, he’d be passing through the village. He needed to meet him. He had a question that needed an answer.

He was the son of one of the most influential men in town, a sign of favor by God. Whenever he asked a question to the religious leaders in his town, they told him exactly what he wanted to hear. He was smart enough to know it, and keen to continue seeking the truth.

If fortune was a sign of righteousness, he reasoned, it was his responsibility to look the part. He had learned the commandments by the age of four, and had done his best to keep them. Yet in the quiet of the night he was plagued with doubt:

I do not understand what I do. For what I want to do I do not do, but what I hate I do.

He hoped this teacher would be different, and that he would be the one to finally give him assurance. He walked the streets with growing urgency. As the sun rose higher in the sky his clothing, and his resolve, dampened.

He made a final turn, ready to give up and go home, when he saw them: A crowd following after a stranger. He was shocked by the sight of him; surely this was not the one they said might be the promised Messiah? Why, he was nothing but a scrawny seedling, a scrubby plant in a parched field. There was nothing attractive about him, nothing to cause anyone to take a second look. (Isaiah 53:2, The Message)

He brushed his doubts aside and stepped through the path they cleared for him. “Good teacher,” he said reverently. The question on his heart burst from his lips as if it would be contained no longer:

What must I do to get eternal life?

“Why are you calling me good?” the man they called Jesus replied.

“You too?” the young man thought, relieved to find someone else harbored similar doubt.

“I do,” he said excitedly, his confidence growing. “Teacher,” he said, “I have kept them all…from my youth!”

“There’s one other thing,” the teacher said.

“Go, sell whatever you own and give it to the poor. All your wealth will then be heavenly wealth. And come follow me.”

The man’s heart skipped a beat.

He hadn’t seen this one coming, but he’d recognized it as true the moment he heard it. His mind raced with defenses and denials, but he remained silent, struggling to process what he had heard.

Could he really just walk away from it all? He had never known hunger or scarcity. He had never been regarded as less than. His gaze fell to the dirt between them. It was a lot to ask.

He had no words. Slowly he turned toward home. His life may not satisfy his heart’s desires, but it satisfied most of them, more than he had realized, and more than he was willing to sacrifice.

Jesus, his heart filled with love, felt the pain of his divided heart; he knew this man had many things.

“Do you have any idea,” he said to the friends gathered with him, “how difficult it is for people who ‘have it all’ to enter God’s kingdom?”

They couldn’t believe what they were hearing; it was the opposite of what they’d been taught all their lives, but it wasn’t the first time he’d turned convention upside down to reveal an undeniable, if shocking, truth. 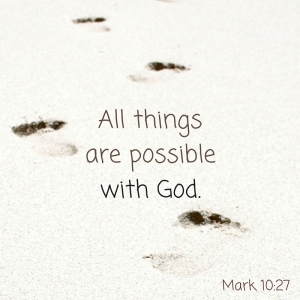 “You can’t imagine how difficult,” he continued. “I’d say it’s easier for a camel to go through a needle’s eye than for the rich to get into God’s kingdom.”

“Then who has any chance at all?” they asked one another and him at the same time.

Jesus was blunt: “No chance at all if you think you can pull it off by yourself. Every chance in the world if you let God do it.”

How often in our own lives do we give God everything…except?

What stronghold stands in your way of a closer walk with the Lord?

Ask Jesus to search your heart and reveal the truth you’ve worked so hard to hide from yourself. (Read Speaking Grace and Truth for more on this.)

Pray that your response will be to trust and obey so that you may move every closer to the One who saves.

One thought on “Grace and Truth: An Eternal Question”